Happiness is within your control. Write your own ending.

Managing Happiness is an online course from Harvard that encourages you to explore the science of happiness, allowing you to find your truest self. 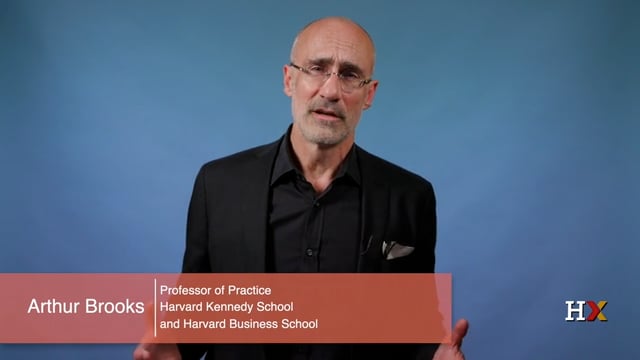 What is happiness? What makes you happy?’ Can you get happier through study and effort?

Maybe you have pondered these questions over the course of your life, but haven’t been able to come up with any definitive answers. Still, you’d like to think that happiness is something you can understand and manage, right?

This is a class that answers these questions and shows you how you can use the answers to build a happier life. It introduces you to the modern science of human well-being and shows you how to practice it. Unlike other happiness courses, Managing Happiness goes a step further and demonstrates how you can share the ideas with others, thus bringing more happiness and love to the world and supercharging your own well-being efforts.

Led by Harvard professor, author, social scientist, and former classical musician Arthur Brooks, this course will introduce cutting-edge survey tools, the best research, and trends in social science, positive psychology, neuroscience, and philosophy to help learners unlock the strategies to create a more purposeful life, full of long-lasting enjoyment and satisfaction. Managing Happiness uses philosophical and technical insights to challenge your assumptions about happiness — helping you break bad habits that hold you back and build good ones you can use for the rest of your life.

Happiness is a core competency for those that want to be in charge of their lives — both personally and professionally. The concepts learned in this course will lead to enduring improvements and lifelong learning. At the end of the course, you will take away key concepts and actionable insights to apply to your daily routines. People around you will notice the difference.

The course will be delivered via edX and connect learners around the world. By the end of the course, participants will be able to:

Arthur C. Brooks is the William Henry Bloomberg Professor of the Practice of Public Leadership at the Harvard Kennedy School and Professor of Management Practice at the Harvard Business School. Before joining the Harvard faculty in July of 2019, he served for ten years as president of the Washington, D.C.-based American Enterprise Institute (AEI), one of the world’s leading think tanks.

Brooks is the author of 12 books, including the national bestsellers “Love Your Enemies” (2019) and “The Conservative Heart” (2015), as well as the forthcoming book “From Strength to Strength” to be published in February 2022. He is also a columnist for The Atlantic, host of the podcast “How to Build a Happy Life with Arthur Brooks,” and subject of the 2019 documentary film “The Pursuit,” which Variety named as one of the “Best Documentaries on Netflix” in August 2019. He gives more than 100 speeches per year around the U.S., Europe, and Asia.

Brooks began his career as a classical French hornist, leaving college at 19, touring and recording with the Annapolis Brass Quintet and later the City Orchestra of Barcelona. In his late twenties, while still performing, he returned to school, earning a BA through distance learning at Thomas Edison State College, and then an MA in economics from Florida Atlantic University. At 31, he left music and earned an MPhil and PhD in public policy analysis from the Rand Graduate School, during which time he worked as an analyst for the Rand Corporation’s Project Air Force.

Brooks then spent 10 years as a university professor, becoming a full professor at Syracuse University’s Maxwell School of Citizenship and Public Affairs in his seventh year out of graduate school and occupying the Louis A. Bantle Chair in Business and Government. During this decade, Brooks published 60 peer-reviewed articles and several books, including the textbook “Social Entrepreneurship” (2008).

In 2009, Brooks became the 11th president of AEI, also holding the Beth and Ravenel Curry Chair in Free Enterprise. Under his leadership, the Institute more than doubled its annual revenues, deepened its outreach to leaders across the ideological spectrum, and expanded its research portfolio to include work on poverty, happiness, and human potential. During this period, he was selected as one of Fortune Magazine’s “50 World’s Greatest Leaders” and was awarded six honorary doctorates.

Originally from Seattle, Brooks currently lives in Needham, Massachusetts, with his wife Ester Munt-Brooks, who is a native of Barcelona. They have three children, Joaquim, Carlos, and Marina.

When you enroll in this course, you will have the option of pursuing a Verified Certificate or Auditing the Course.

A Verified Certificate costs $149 and provides unlimited access to full course materials, activities, tests, and forums. At the end of the course, learners who earn a passing grade can receive a certificate.

Open innovation is a strategy that suggests the best ideas, solutions, and people necessary to solve your organization’s difficult problems may come from outside your company entirely.

Tackle tough problems and thrive through the dangers of change

The crises of our time generate enormous adaptive challenges for our families, organizations, communities, and societies. The need for leadership that can mobilize people to meet these challenges and improve life is critical.

Learn about prior attempts to address social problems, identify points of opportunity for smart entrepreneurial efforts, and propose and develop your own creative solutions.